Take the Fear Out of Math

For the kid who isn’t engaged in memorizing multiplication tables or formulas, connect math to something they’re already interested in.

Let’s be honest. Quite a few of us hate math. (We see you raising your hand as you read this!) It’s usually the adults in the room who say they’re not fans. According to a survey conducted by Texas Instruments, the company that makes those calculators you lugged to class every day in high school, kids actually like math a lot. Only 24% of the middle and high school students surveyed said they dislike the subject. Blame us grown-ups for instilling disdain because 44% of the kids said they’ve heard an adult say, “I hate math.”

This love/hate relationship with math has been going on for generations. But Noel Price Perkins, M.S.Ed., Program Coordinator at Math Circles of Chicago and Prepared UNBOXED Guest Master Teacher who designed the UNBOXED project, Think Globally, Act Locally, says, “Math can be joyful!”

“The way we teach math does it a disservice. When we focus only on skills like multiplication facts, kids may not learn them particularly well. When math is attached to something interesting and different—something real— it becomes more meaningful.”

Think Globally, Act Locally teaches kids to harness the power of numbers and is just one of the UNBOXED projects for kids in grades 4–9 that combines project-based learning with social-emotional learning. It’s offered free of charge by Prepared Parents and encourages kids to use their math skills to be entrepreneurial and develop a business plan.

Math rules the world. Both the natural and the human-made world are built mathematically. From a geometrically-structured honeycomb to a skyscraper, everything is constructed on a foundation of math. “When we connect math to the beautiful things in our world that are true and are special, I think we’re able to create deeper, more emotional connections to it,” says Noel.

The science behind math.

Making those connections is key to igniting a kid’s passion for learning math. Research shows us we don’t fall into distinct groups of math-lovers and math-haters. We’re all wired for math through a network of regions in our brains that includes the posterior parietal cortex, the ventral temporal occipital cortex, and the prefrontal cortex. Working that network is healthy. The more math we do, the more we exercise our brain. The very act of mathematical calculation improves reasoning, enhances problem-solving, encourages healthy risk-taking, and increases confidence.  Math helps us handle unfamiliar tasks with ease by promoting careful thinking through trial and error.

Math is the universal language.

Math is the one language that crosses borders and boundaries. So our kids should become fluent. But how they are taught may turn them off.

Noel tells us that there is a push in schools to master discrete math skills like algebra independently of geometry, and that may not be the best way to teach it. She suggests, “we should think of math as a landscape with rivers, mountains and roads that all interconnect. That way the kid who struggles with solving an equation algebraically may be able to do it geometrically.”  Find other ways to solve for X. For the kid who isn’t engaged in memorizing multiplication tables or formulas, connect math to something they’re already interested in. “Meet a kid where they’re at,” Noel recommends. “It’s what they already enjoy about the world that’s the best place to start.”

“When you look back through history, you see that trading could happen throughout the world because people understood numbers and value even though they could not communicate through a common language.”

With a younger kid, instead of learning addition and subtraction using blocks, try leaves or pebbles from the beach. How about using items they’ve collected and cherish as manipulatives? Older kids can develop math skills through gaming as Noel explains, “All those games actually have a mathematical structure. You either get it or you don’t, and if you don’t, you try a different strategy. That’s mathematical.”

A 2012 Raytheon study found that moms are 72% more likely than dads to feel they can’t help their elementary-age kids with their math homework. In classrooms, girls’ confidence can be undermined, as Noel says, “In a lot of math classrooms boys dominate and that makes girls feel less confident. As teachers we have to build up those girls and ensure they have a voice, too.”

It’s not a question of competence. Nationally, girls’ math test scores have been consistently equal to or within two points of boys in the fourth and the eighth grade over the last several years. But the number of girls enrolled in advanced math classes still lags behind boys, sometimes due to a teacher’s bias.

Another challenge to finding joy in math is a parent’s passing their own math anxiety to their kid. Recent research shows that kids of math-anxious parents learn less math during first through third grades because those parents unintentionally teach their kids to expect the subject to be beyond their capabilities.

To overcome your own anxiety, acknowledge how often you successfully use math throughout the day and share that with your kid. Make math a game. Add the numbers in license plates while you sit in traffic. Estimate the amount of time it takes to sprint around the block and give an award to the family member whose guess is closest.  And when you use math to balance the checkbook or calculate the interest rate on the car loan, let your kid work with you.

By bringing math to life with real world applications you’re showing your kid that math isn’t hard, it’s useful. And it can be fun and empowering. Next time you plan a road trip, ask your kid to help map the route based on time and mileage. Ordering take-out? How much should you tip the delivery driver? Buying a new shovel for this winter’s snow? Is the cheaper one the better one? Based on the last season, how often will it be used, and will it last? Ask your kid to do the calculations. 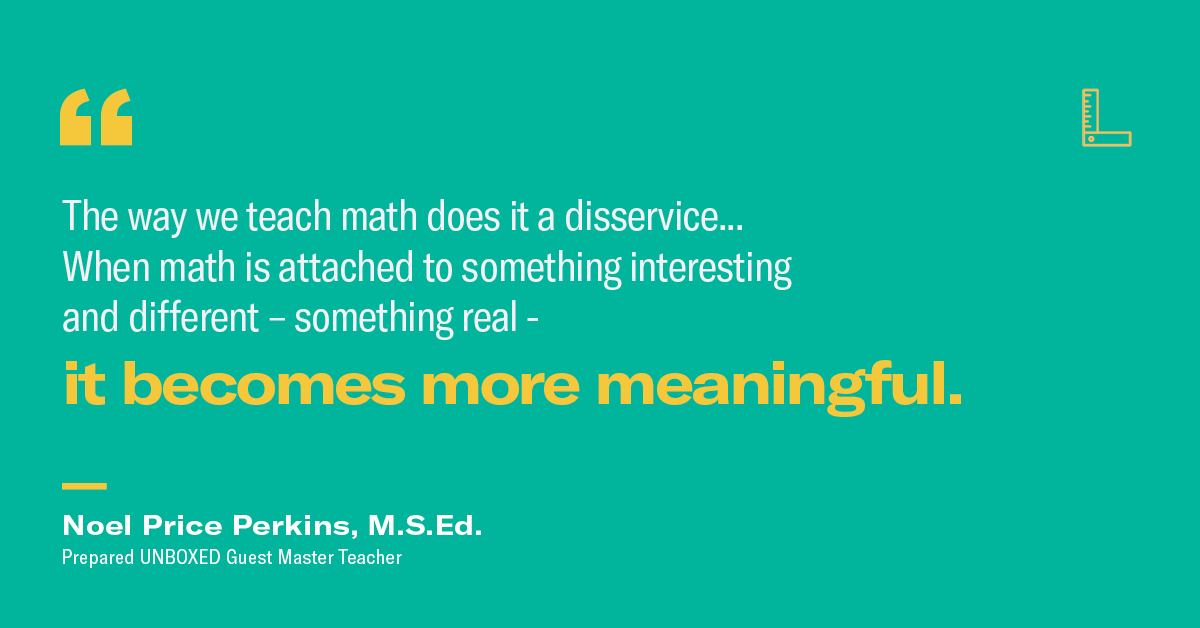 The resilience you build through math comes from trying something, failing, and trying again. And as Noel stresses, “The problem solving we have to do in our adult lives cannot be overstated. Math teaches you the practice of using what you already know and applying it to tackle something unfamiliar that might feel scary.”

Reflection can help. When faced with math challenges that feel overwhelming,  ask your kid to think about a time when they felt really confident about math and draw from that to power through right now.

Collaborate as a best practice

Doing math collaboratively is a great way to learn. Noel tells us why: “If you’re practicing math in a team, that’s going to serve you forever. You’re learning the skills of empathy and understanding by hearing other people’s perspective and learning consensus—how to respectfully and with humility agree and disagree. That’s something we have to do a lot as adults.”

There’s no reason to be afraid of math. In fact, mathematicians are solving today’s biggest and most difficult problems.

“If I were again beginning my studies, I would follow the advice of Plato and start with mathematics.”

Kids with a growth mindset believe their abilities can improve over time.